Most people don’t realize that although fudge is delicious when freshly made, it can actually be frozen for up to a year without losing any of its flavor!

To properly freeze fresh fudge, cut it into whatever size pieces you want to freeze, and then wrap each piece with an airtight wrapping material, such as aluminum foil or Saran® brand wrap. Most plastic wraps other than Saran® are actually not airtight, and won’t protect your fudge against moisture or water vapor.

After they are wrapped up, place the pieces of fudge into a plastic freezer bag. Remove as much of the air as possible before you seal the bag, and then store it in the freezer until it’s needed. Only put as much fudge as you will want to defrost at any one time into each plastic freezer bag.

The most important part of freezing is actually in the thawing. That’s right, properly thawing out your frozen fudge is crucial to its flavor and consistency.

When you are ready eat fudge, remove it from the freezer, keeping it in the plastic bag. If the fudge is removed from the plastic bag before it reaches room temperature, moisture in the air will condense on the cold fudge, making the top sticky and soft.

Let the fudge sit in its wrapping and plastic bag at room temperature until it has completely thawed.

After the fudge is completely thawed remove it’s wrapping and enjoy!

If you have pictures of ways you use your left over Bon Bon Fudge share them with us on our Facebook page.

Before 1886, the origin and history of fudge is unclear, but Fudge is thought to be an American invention. Most believe the first batch was a result of a accidental “fudged” batch of caramels, hence the name “fudge”. 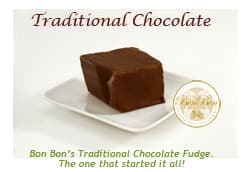 Bon Bon Candies
In 1886, fudge was sold at a local Baltimore grocery store for 40 cents a pound. This is the first known sale of fudge. A letter, found in the archives of Vasser College, written by Emelyn Battersby Hartridge reveals that Emelyn wrote that her schoolmate’s cousin made fudge in 1886 in Baltimore and sold it for 40 cents a pound.In 1888, Miss Hartridge asked for the fudge recipe, and made 30 pounds of fudge for the Vassar Senior Auction. The recipe was very popular at the school from that point forward. Fudge became a new confection after word spread to other women’s colleges of the tasty delight. Later, Smith and Wellesley schools each developed their own recipe for fudge.